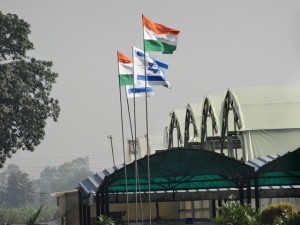 I believe India and Israel together, can solve the global food crisis…here I would like to recall the words of Mr. Benjamin Netanyahu “We are both ancient nations, ancient civilizations, we treasure our past, we take pride in our past, but at the same time, we want to seize the future. The future belongs to those who innovate. Israel and India are the cutting edge of so many areas of innovation. And by working together, we can do a lot more for our people and for the world.” (Prime Minister Benjamin Netanyahu meeting with Indian External Affairs Minister Sushma Swaraj, January 18 2016)

Israel is accustomed to handling ‘BDS movement’ kind of challenges. Israel is known for many things and agricultural technology is one of them. Mr. Daniel Carmon, Israel’s ambassador to India, is doing phenomenal work to boost agricultural cooperation between both countries.

Union budget 2016-17 is pro-agriculture. The government is trying to improve agriculture sector through the fusion of traditional farming practices and modern technology. In the 2016-17 budget Rs35,984 crore is allocated for agriculture. This budget proposed a number of measures to improve agriculture and to increase farmer’s welfare like 2.85 million hectares to be brought under irrigation, Rs 287,000 crore (US$ 42.11 billion) grant in aid to be given to gram panchayats and municipalities and 100% village electrification targeted by May 01, 2018. The budget’s key focus is improving the social and economic situation of rural India and developing smart villages.

During the 7th Vibrant Gujarat Summit India and Israel have signed a joint agreement for the third phase of the Indo-Israel Agricultural cooperation project. During the first and second phase of this project, 26 centers of excellence have been set up in different parts of India. In the third phase (2015-2018) both countries will further strengthen the bilateral agricultural development cooperation. Israel has opened center of excellences in different states of India mainly in Haryana, Punjab, Utter Pradesh, Gujarat, Maharashtra, Rajasthan, Bihar, Karnataka and Tamil Nadu and planning to expand further. Haryana is one of the most active states in Indo-Israel Cooperation project, According to S.K. Yadav, project manager of the Gharaunda centre, Haryana, over 60 farmers, not only from Haryana but also from states like Himachal Pradesh, Uttar Pradesh, Bihar and even Tamil Nadu, visit the centre daily. Last year, over 16,000 farmers were trained at the centre. Haryana is applying Israeli techniques to model its irrigation projects. This year Haryana would be initiating micro-irrigation projects based on Israeli expertise at 14 sites. (Published in Revolutionising Indian farming – with Israeli technology)

Here I would like to give a special thank to Israeli agricultural experts Mr. Yoram Eisenstadt and Mr. Asher Eizenkot. Their works in this field are remarkable, through regular workshops and guiding sessions these experts are sharing their knowledge, technologies and expertise in the field of agriculture and horticulture with our farmers and building a generation of trained and experts farmers in India.

The Indo-Israel Agriculture Project is the collaborative effort of the Israeli Embassy, Indian center and state government bodies, the Indian Agriculture Ministry’s Mission for Integrated Development of Horticulture and MASHAV (Israel’s Agency for International Development Cooperation in the Foreign Ministry). In the third phase, the Indo-Israel Agriculture Project will be aiming to open 10 more completely new Centers of Excellence in six more states. The new states to be involved in the expansion include Andhra Pradesh, Telangana, West Bengal, Madhya Pradesh, Goa and Mizoram.

I believe our agricultural cooperation is going in a right direction but there is a need to give a strong push because this time the opportunities are enormous and our government is supporting like never before.
Here I would like to share some statistics too: In terms of agricultural contribution, some of the most developed states in India are: Uttar Pradesh, Punjab, Haryana, Madhya Pradesh, Andhra Pradesh, Telangana, Bihar, West Bengal, Gujarat and Maharashtra. About 60% of India’s population is dependent on agriculture. India has the second largest agricultural land in the world. According to the World Bank’s latest survey data, around 60.3 percent of India’s land area is agricultural land. India ranks second worldwide in farm output. As per estimates by the Central Statistics Office (CSO), the share of agriculture and allied sectors (including agriculture, livestock, forestry and fishery) was 15.35 per cent of the Gross Value Added (GVA) during 2015–16. India is second largest fruit producer in the world. The agro-industry in India is divided into several sub-segments such as canned, dairy, processed, frozen food to fisheries, meat, poultry, and food grains. India is the largest producer of milk, accounting for 18.5 per cent of the total world production. It also has the largest bovine population. India is the second-largest producer of sugar, it accounts for 14 per cent of the global output. It is the sixth-largest exporter of sugar, accounting for 2.76 per cent of the global exports.

These days Indian government is using mobile technology to educate farmers about best agricultural practices and seasonal warnings, ‘mkisan.gov.in’ is a comprehensive portal and the single source of agricultural information for farmers. As per TRAI, there are about 38 crore mobile telephone connections in rural areas, therefore mobile service is the best option to reach farmers. The government is using various other modes of information delivery too like touch screen kiosks, agri-clinics, private kiosks, mass media, Common Service Centres, Kisan Call Centres, and integrated platforms in the departmental offices coupled with the physical outreach of extension personnel equipped with pico-projectors and hand-held devices.

Some notable initiatives of current government are:

Shyama Prasad Mukherjee National Rurban Mission- It is based on the idea of a smart village. It aims to encourage social, economic and infrastructure development in rural areas by developing a cluster of 300 smart villages over next 3 years across the country. It’s a unique idea of combining urban and rural India, PM referred to Rurbans as territories ‘with the soul of village and facilities of city’.

Innovative Crop Insurance Scheme- The central theme of this innovative crop insurance scheme is ‘Minimum Premium, Maximum Insurance’ for farmers. Main features of this scheme are: For the first time emphasis has been given to mobile and satellite technology to facilitate accurate assessment, farmers will pay the lowest ever premium rate, only one premium rate for each season, removing all variations in rates across crops and districts within a season, the flood is included under localized risk cover, post-harvest losses arising out of cyclones and unseasonal rain have been covered.

Soil Health Card (SHC) scheme, soil testing laboratories, PM Krishi Sinchai Yojana, Digital Literacy Mission Scheme, Rashtriya Gram Swaraj Abhiyan, PMGSY etc. are some of those initiatives that will help in the transformation of real India. Besides this Government is pushing rural youths to start their startups/MSME/SMEs in the farming/agriculture sector and to facilitate their financial needs ‘Pradhan Mantri Mudra Yojana’ is launched. (Source of the facts: government’s official online records and Wikipedia)

This year’s budget is unique in itself and it’s an opportunity for Israel. I appeal to all Israelis friends to participate in Digital India, Make in India, Startup India and other running programmes. Our Prime Minister Mr. Narendra Modi used to say “We want to present to the world the enormous opportunities that India presents… This is the best time to be in India, even better to ‘Make in India’.”