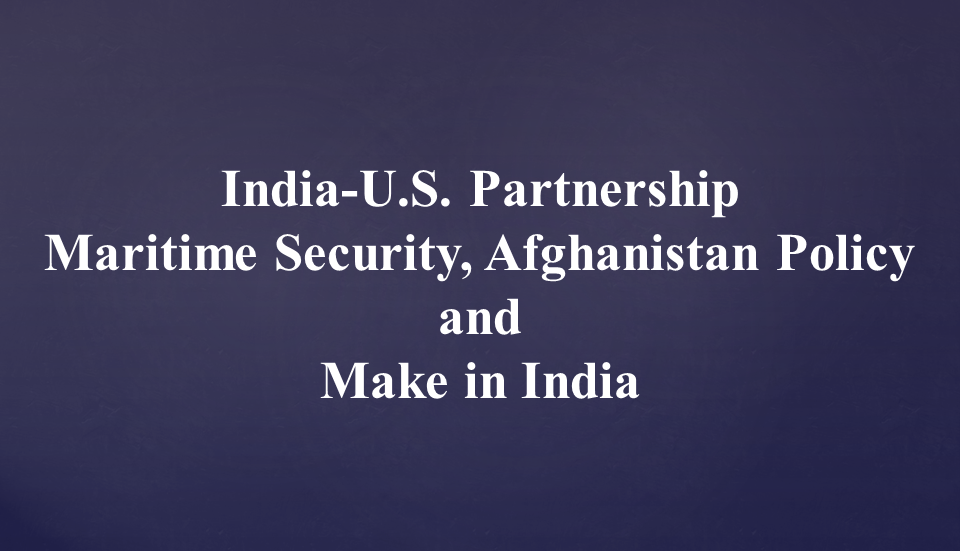 India-U.S. Partnership :- US Defense Secretary James Mattis’s recent visit to India has brought clarity on some of the crucial issues of mutual interests. This visit was also a reiteration of the commitments made between the two countries during Prime Minister Mr. Narendra Modi’s U.S. visit in the month of June. President Trump and Prime Minister Modi have outlined a broader vision for the future of this partnership.

The U.S. administration’s stand on ‘radical Islamic terrorism’ and ‘safe havens for terrorist organizations’ is bold and clear, which is crucial for strengthening the trust in this partnership. Both sides have committed to strengthening cooperation against terrorist threats from groups including Al-Qa’ida, ISIS, Jaish-e-Mohammad, Lashkar-e-Tayyiba, D-Company, and their affiliates.

India and U.S. consider Maritime security and peace in the broader Indo-Pacific region as one of the most crucial shared objectives. During the last three years, the maritime engagements between India and U.S. have enhanced. The U.S. government has cleared the sale of Sea Guardian Unmanned Aerial Systems to India; this would be the first U.S. sale of the Sea Guardian to a Non-NATO partner nation. Both countries are about to conclude the ‘White Shipping Agreement’ too.

The launch of Maritime Security Dialogue in 2016, Japan’s permanent partnership in Malabar Naval Exercises and the frequency of Maritime security discussions reflect that maritime security threat is a major area of concern for both nations and strengthening bilateral maritime security cooperation is a key priority for the both governments. A few days back Chairman of the US Joint Chiefs of Staff General Joseph Dunford has also said that “A long-term strategic security relationship with India is critical to ensuring freedom of navigation in the Indian Ocean.” Both sides are exploring the possibilities of including new members in the annual Malabar exercise such as Australia and Singapore. India’s Act East and SAGAR (Security and Growth for All in the Region) kind of policies help in maintaining the much-needed balance in the region.

Maritime power is a crucial component of national power and a key enabler for development and growth. The safety and security of seaborne trade and energy routes in Indian Ocean Region have the profound effect on global economies. India and U.S. maritime cooperation are crucial for maintaining the freedom of navigation and strengthening the UNCLOS. There is a great scope for cooperation and coordination between India and navies of U.S. allies to counter common threats at sea and to strengthen the coordinated mechanisms for maritime security operations.

The events of ‘26/11’ have created urgency for revamping the coastal and offshore security organizations. There is a continuous rise in non-traditional threats in maritime space and maritime terrorism is a major area of concern. After waiting for a long time, now the Indian Navy‘s strategy has received a strong push.

In the month of August, President Donald Trump’s has announced his Afghanistan policy and in a very clear-cut message to Pakistan he said that “Pakistan often gives safe haven to agents of chaos, violence, and terror.” And “the next pillar of our new strategy is to change the approach in how to deal with Pakistan. We can no longer be silent about Pakistan’s safe-havens for terrorist organizations, the Taliban and other groups that pose a threat to the region and beyond.”

Mr. Trump’s renewed Afghan policy represents a qualitative shift in the U.S. approach and it has been widely welcomed by the Afghanistan and Indian government. President Trump has appreciated India’s role in the development of Afghanistan and he called upon India to do more in the area of economic assistance and development. This year in the month of June, U.S. Department of Defense has released its report “Enhancing Security and Stability in Afghanistan”, this report has acknowledged India’s constructive role in Afghanistan too. This report has mentioned that India is Afghanistan’s most reliable regional partner and the largest contributor of development assistance in the region, including civil development projects. The new U.S. administration with a good number of officers from U.S. Army background (Defense Secretary Mattis and Trump’s chief of staff John Kelley are from the US army) is much aware of the ground realities and about the role of Pakistan in harboring the terror in the region.

The USFOR-A (U.S. Forces–Afghanistan) currently retains approximately 8,400 personnel in Afghanistan. According to U.S. government’s official data some 20 insurgent and terrorist networks present or operating in the Afghanistan-Pakistan region, including the Taliban, the Haqqani Network, ISIS-K, and al Qaeda, it is the highest extremist and terrorist group concentration in the world.

The construction of ‘Salma Dam’ or Afghanistan-India Friendship Dam, Afghan parliament building in Kabul, the Zaranj-Delarm road on the main Herat-Kandahar Highway, power sub-stations at Doshi- Charikar in northern Afghanistan and hospitals in Kabul are some of the recent notable examples of India’s contribution to the sustainable development in Afghanistan. India has trained over 4000 Afghan military officers. A few days back India has signed an MoU for providing capacity building training to Afghanistan National Police. In 2016, India has approved the 3rd phase of Small Development Project covering public health, education and community infrastructures. India’s Small Development Projects have benefited Afghanistan’s local communities a lot. These projects have helped Afghanistan government to build schools, health centers and irrigation facilities for rural communities. Now to expand the area of cooperation, in the month of September 2017, the Indian government has committed cooperation in some 116 new High Impact Development Projects related to socio-economic and infrastructure development, particularly in the suburban and rural communities in 31 provinces of Afghanistan.

Last month, India has hosted the first India-Afghanistan Trade and Investment Show “Passage to Prosperity”. The show is sponsored by the USAID. A good number of representatives from Afghan and Indian companies have participated in this show to discuss potential investment opportunities.

The positive trends in India-U.S. defense are linked with the growing convergence of American and Indian defense interests. India-U.S. defense trade has a great potential. At Aero India 2017, U.S. companies have shown a keen interest to participate in ‘Make in India’ initiative. During Aero India 2017, American defense firm Raytheon signed an MoU with Tata Advanced Systems Limited to engage in co-production of Stinger air defense missile components under ‘Make in India’. Besides this other U.S.-based defense firms like Textron Systems Weapon & Sensor Systems have shown great interest to participate in the ‘Make in India’ initiative and they are exploring the opportunities to set up the manufacturing base in India.

During the last three years, India and United States have made significant progress on the Defense Technology and Trade Initiative. The DTTI seeks to deepen defense cooperation between India and the United States by elevating dialogue on cooperative research & development and defense trade to the highest levels of government. The DTTI was one of the key agenda in the talks between U.S. Defense Secretary James Mattis and Defense Minister of India Mrs. Nirmala Sitharaman, they have discussed the ways to reenergize DTTI to promote technology sharing and to explore new opportunities for Co-Development and Co-production as a part of Make in India. The top U.S. defense firms Lockheed Martin and Boeing are bidding for combat jets projects in India.