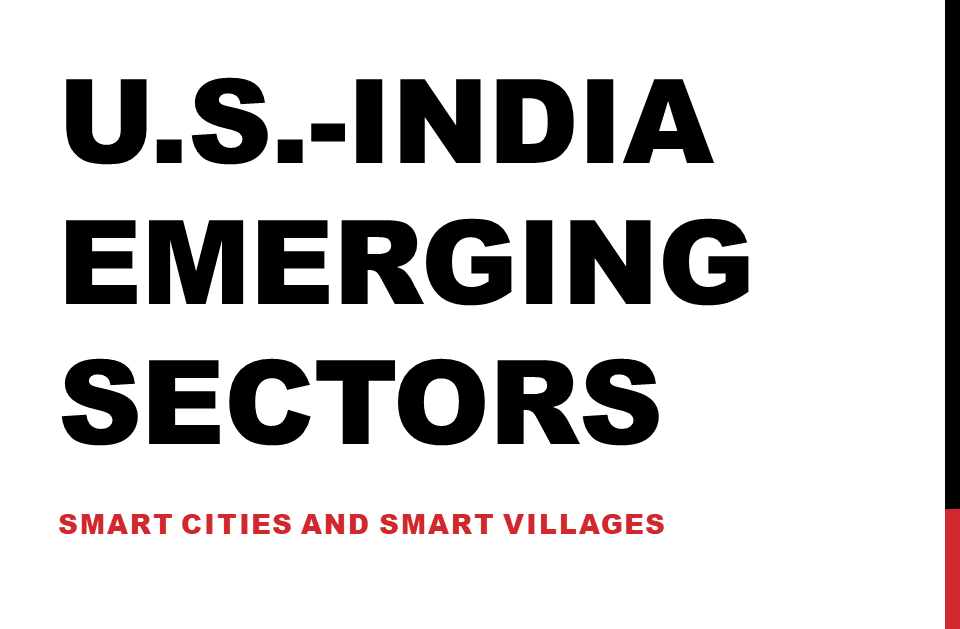 There is a lot of discussion going on about the future prospects of U.S.-India partnership among the business community and it’s a good sign for the business. To take this partnership to the next level there is a need to keep the notions aside. The bilateral trade between the U.S.-India has the potential to reach up to US$ 500 billion by 2025!

To shape the future of U.S.-India trade, G2B and G2G partnership are crucial. This year in the month of August, to drive the participation of the young CEOs Prime Minister of India, Mr. Narendra Modi has launched the “Champions of Change-Transforming India through G2B partnership” initiative. PM Modi is channelizing the result oriented activities of the business leaders with the human welfare and inclusive growth agenda of the Indian government.

The Indian government has taken a number of initiatives to boost trade and commerce in the country. On 1st April 2015, the government has launched the ‘New Foreign Trade Policy (2015-20)’ to support merchandise and services exports and improving the Ease of Doing Business in India.

Some notable measures of the Indian government for promoting the foreign trade are: the numbers of documents for export/import have been reduced to 3, e-IEC – an online application for Importer-Exporter Code was launched, online inter-ministerial consultations have been initiated for considering applications for issue of authorizations for the export of SCOMET items (Special Chemicals, Organisms, Materials, Equipment, and Technologies), simplification of various import/export forms, Trade Infrastructure for Export Scheme (TIES) has been announced to enhance the export competitiveness, the Indian Trade Portal was launched by the Department of Commerce, which provides useful information related export/import, commerce ministry has also launched “Niryat Bandhu @ Your Desktop” an online certificate programme in export-import business under the Niryat Bandhu Scheme etc.

In the USA, the approach of the Trump administration towards protecting the interests of the small businesses is serious. President Trump considers small businesses as the engine of the economic growth and he is working to bring some major tax and regulatory reforms to ease the business environment in the country. Simplifying the tax code, reducing the U.S. corporate tax rate, and repealing job-killing regulations are some of the key priorities of the new U.S. administration.

While evaluating the current situation of the U.S.-India trade, it is necessary to understand that both countries have their own unique situations and the current leadership of both sides is intended to take bold decisions for the welfare of their people. The U.S.-India business community should dedicate their energy and resources towards creating a win-win environment. There is a need to explore the opportunities where government and business can work together to change the lives of the citizens. The newly launched US-India Strategic Partnership Forum (USISPF) is working in this direction. In a short span of time, the vibrancy of their initiatives and approach has turned the gloomy perceptions about U.S.-India trade into a clear vision! The USISPF team is interacting with the different state governments in India to achieve the mutual goals of driving economic growth, job creation, innovation, inclusion, and entrepreneurship.

2017-18 is the year to explore emerging sectors and untapped business opportunities between U.S. and India. The bilateral trade between the two countries increased to USD 64.51 billion in 2016-17, from USD 62.11 billion in the previous fiscal. In 2014, an India-U.S. Investment initiative was started to facilitate FDI, portfolio investment, capital market development and financing of infrastructure and the U.S.-India Infrastructure Collaboration Platform was also launched. PM Modi’s meeting with US President Donald Trump has elevated this partnership from shared interest level to priority partners. Balancing the trade relations and removing obstacles to growth are some of the key areas where both leaders have a shared commitment. According to DIPP data, during April-June 2017, India has received US$ 660 million FDI investments from the USA.

According to the latest report of OECD, India’s GDP growth rate will overtake China’s in the next financial year. The report says that though Indian economy may suffer a temporary setback due to some of the bold reforms like GST and demonetization but in the long term, India will pick up an impressive growth rate. India’s development agenda is ambitious. India is taking a quantum leap towards next-generation infrastructure in both rural and urban areas. This includes Freight Corridors, Industrial Corridors, High Speed and Metro Rail projects, Logistics Parks, Smart Cities, Coastal Zones, Regional Airports, Water, Sanitation, and Energy initiatives etc. A more modernized, industrialized and urbanized India would create new demands/opportunities.

The emerging sectors with the tremendous opportunities for collaboration between U.S.-India are Smart Cities and Smart Villages.

Smart Cities: Two years back launched India’s Smart Cities Mission has opened up a plethora of business opportunities for the infrastructure, urban development, and technology sector of the USA. Focusing on Infrastructure and Smart Cities is one of the recommendations of India-U.S. strategic and commercial dialogue too. The smart cities mission aims to modernize the existing mid-sized cities as satellite towns of larger cities. The key strategic components of smart city mission are city improvement, city renewal and city extension plus a Pan-city initiative in which Smart Solutions are applied covering larger parts of the city. A few days back Indian government has launched a contest ‘India Smart Cities Awards Contest 2017’ to measure the progress of various ongoing smart city projects.

India’s smart cities mission is not a typical government project with fixed model and rigid constraints, there is a great scope for innovation in this program. According to smart city mission’s official sources, the Government is not prescribing any particular model to be adopted by the Smart Cities. The approach is not ‘one-size-fits-all’; each city has to formulate its own concept, vision, mission, and plans that are appropriate to its local context, resources, and levels of ambition.

For smart city project selection, the Indian government is using a unique competitive process called ‘smart city challenge’. This approach has inspired the cities across the country to formulate their own unique vision, mission, and smart city proposal. For this process, Urban Development Ministry, the government of India and Bloomberg Philanthropies has signed an MoU and Bloomberg Philanthropies is working as a knowledge partner in this program.

Smart Governance, Smart Energy, Smart Environment, Smart Transportation, Smart IT and Communications, Smart Buildings, Smart Health & Hospitals, and Smart Education are the 8 pillars of India’s Smart City Mission and the Indian government is working aggressively on each of these areas.

Smart Villages: According to latest census data, in India, around 833 million people, almost 68% of the total population lives in rural areas. The large parts of rural areas in India are not stand-alone settlements but part of a cluster of settlements, which are relatively proximate to each other. These clusters have locational and competitive advantages and offer a great potential for growth.

The Smart Village mission offers a plenty of opportunities for public-private collaboration. Top U.S. companies are actively participating in the Smart Village program. The Maharashtra government and Microsoft have already set an example for this by developing the first digital village ‘Harisal’ in the Maharashtra. Microsoft is planning to spread this project of Smart Villages to 100 more villages. Another US giant Cisco is actively participating in smart cities and smart villages programs simultaneously. At present Cisco is working to digitize Fetri village in Nagpur district, providing Wi-Fi, healthcare and education are some of their key priorities. To provide free Wi-Fi to 1,050 rural villages across the country, this year the Indian government has launched a pilot project called ‘Digital Village’, this project will run on PPP model and will be driven through CSCs.

The Smart Village is about combining the spirit of villages and facilities of cities. Smart Villages, Rural Electrification, Digital Literacy and Financial Inclusion through JAM (Jan-Dhan Accounts, Aadhaar, and Mobile Governance) are different dots connected with the broader vision of transforming the Real India – Rural India.

The top U.S. companies that are involved in the smart city projects in India have a great opportunity to extend their portfolio to include smart villages too. Their technological skills and expertise can help India’s smart city and smart village programs simultaneously.