Benjamin Netanyahu: Together We Can Shape the Future (Israeli Prime Minister’s Reciprocal Visit to India) 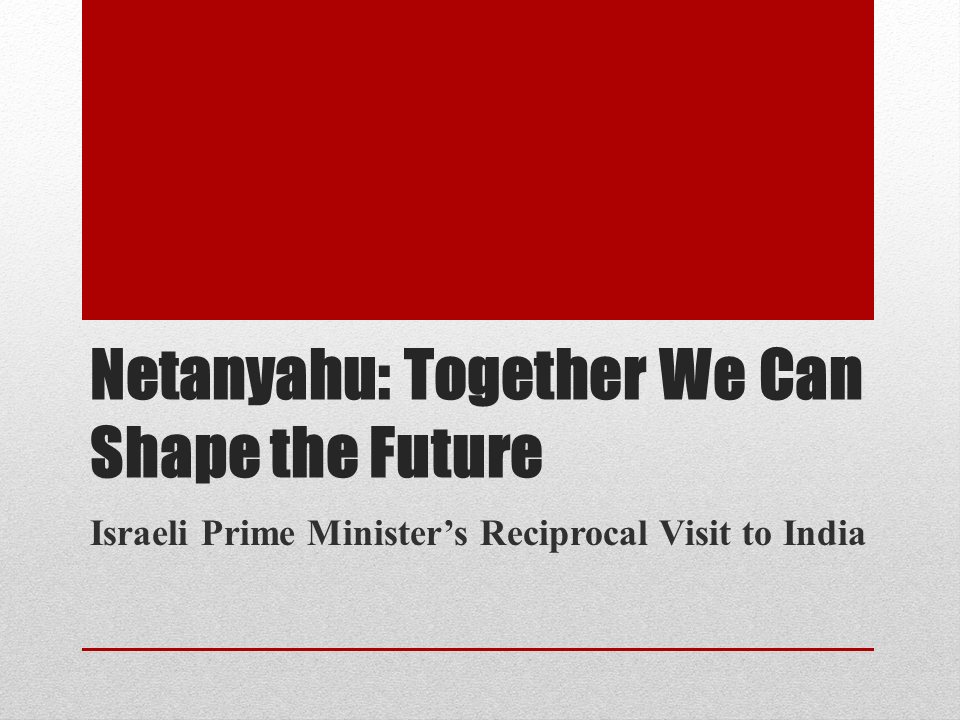 Prime Minister Narendra Modi’s ‘standalone’ visit to Israel is considered as a breakthrough step in the India-Israel partnership. During his reciprocal visit to India, Israeli PM Benjamin Netanyahu has rightly pointed out that PM Modi has “revolutionized the relationship between Israel and India.”

The focus of PM Netanyahu’s visit was more on enhancing the people to people relations, expanding commercial cooperation and breaking the conceptual barriers of the past. PM Modi and Netanyahu have demonstrated a high level of spirit, ambition, and commitment in their engagements.

During Israeli PM’s visit to India, the two countries have signed nine MoUs in various sectors, including cyber-security, Oil and Gas, Solar Energy, Space Science, Air Transport, Medicines, and Film Production. PM Modi and Netanyahu have asked their teams to work toward building a durable and multifaceted cooperation between both countries.

–MoU on Cyber Security Cooperation to promote B2B partnership in the cyber security domain. Promoting cyber-security skill development in India, through different innovative training programmes and industrial exchanges is one of the key aspects of this agreement. There is an emphasis from both sides on building comprehensive cooperation in counter-terrorism, including in cyber-space.

–The energy sector has emerged as one of the significant areas of cooperation between the two countries. Earlier in the month of January, Mr. Shaul Meridor, the Director General of Israel’s Ministry of Energy, hosted a high-level delegation of the Indian government which comprised the senior officials from Indian energy companies. During Netanyahu’s visit, a couple of agreements and LoIs have been exchanged to promote joint research and development activities in the energy sector i.e. MoU between the energy ministries of both sides to explore opportunities for joint economic projects in oil and gas sector, including collaboration in upstream sector, R&D and technology by promoting academic exchanges and institutional linkages and for encouraging the startups to participate in this sector too, Letter of Intent was exchanged between Indian Oil Corporation Ltd. and Phinergy for joint R&D, deployment, and manufacturing activities. Phinergy is an Israeli startup that develops clean and high energy density systems based on metal-air technology. The IOCL has signed another Letter of Intent with Israel’s Yeda Research and Development Company Ltd. (a commercial arm of Weizmann Institute of Science) for joint research activities related to concentrated solar thermal technologies.

— Apart from this, to encourage B2B participation, Invest India and Invest Israel have signed agreement to exchange information on investment opportunities and policies between the two countries. An MoU for establishing a joint working group to conduct research in homeopathic medicines was also signed between the Central Council for Research in Homeopathy, India’s Ministry of AYUSH and the Centre for Integrative Complementary Medicine of Shaare Zedek, a major hospital of Israel. Both sides have also signed a protocol on amendments to air transport agreement, which envisages entering into cooperative marketing arrangements and other JV agreements for the purpose of operating the agreed services on the specified routes. An agreement for Film Co-Production was signed too.

Joint Ventures and Joint Manufacturing in the Defense and Security Sector

In the joint statement, there is an emphasis on developing more business models for the joint ventures and joint manufacturing including the transfer of technology and joint R&D in defense and security sector too. Both PMs have called on the defense ministries to maximize engagements and discussions with public and private sector players of both sides to create the basis for viable, sustainable and long-term cooperation in the defense industry.

There is a reiteration of the mutual consensus that there can be no justification for acts of terror on any grounds whatsoever and there should be strong measures against terrorists, terror organizations, those who sponsor terrorism or provide sanctuary to terrorists and terror groups. The next meeting of the India-Israel Joint Working Groups on Homeland and Public Security will be held in February 2018.

This time, a number of new dimensions have been included in the agenda of India-Israel commercial cooperation. There are mutual efforts to deepen cooperation in Agri-tech, Water-tech, Digital Health, Solar Energy, Advanced Technology, Space Science, Smart Mobility, Advanced Research and Education, Tourism and Culture.

On the occasion of India-Israel business summit, PM Modi has mentioned that “India has size and scale and Israel has sharpness and edge.” and he has invited Israeli entrepreneurs to leverage the opportunities of ‘Transforming India.’ To promote the culture of co-development of new technologies, Modi and Netanyahu have inaugurated iCreate, an international centre for entrepreneurship and technology, located on the outskirts of Ahmedabad. Both Prime Ministers have launched the first Call for Proposals under the I4F fund to encourage enterprises to utilize this platform for undertaking joint R&D projects. The Governments of both sides are working together on a Five Year Joint Work Plan for strategic cooperation in Agriculture and Water. With this visit, another round of three years (2018-2020) of India-Israel Agriculture Cooperation has commenced.

Both sides have decided to expedite the conclusion of an Agreement on Maritime Transport that will encourage greater cooperation between the shipping organizations of India and Israel, and Israel’s participation in the Sagarmala project. Both countries have also decided to explore ways to join hands in common assistance programmes for the third countries in the areas of training, capacity building, and the development of small projects in agriculture, water, health-care and education sectors. The respective Foreign Ministries will commence discussions in this regard in 2018.

The Defense and Security Cooperation is one of the most crucial strategic assets of this partnership and there is a need to explore innovative ways to expand military and commercial cooperation. Both leaders have also mentioned that we have not utilized the full potential yet.

On the sidelines of Israeli PM’s visit, Head of SIBAT, the International Defense Cooperation Directorate of Israel Ministry of Defense and officials from India’s Department of Defense production had a discussion to explore the possibilities of collaboration in defense manufacturing.

In the last few months, India’s MoD has accelerated the process to encourage Startups and SME’s participation in the Indigenous defense manufacturing. On 16th January 2018, the Defence Acquisition Council, chaired by Defense Minister Ms. Nirmala Sitharaman, has announced a revised and simplified ‘Make II’ procedure, in which some special provisions are given to MSMEs. In India, a number of MSMEs used to serve as the suppliers to DPSUs and they are the key players behind the success of some major defense manufacturing projects. Defense Ministry of India in cooperation with FICCI has launched a platform to facilitate defense startups called ‘Society for Indian Defence Startups (SIDS)’, which will act as an institutional support mechanism for development and funding. The DPSUs and DRDO labs will also collaborate with FICCI to nurture the MSMEs with the relevant expertise. For the first time, a number of Indian defense startups have made their presentations before Defense Minister. Such initiatives reflect that Indian government is ready to give Indian defense Startups/SMEs a much-needed push.