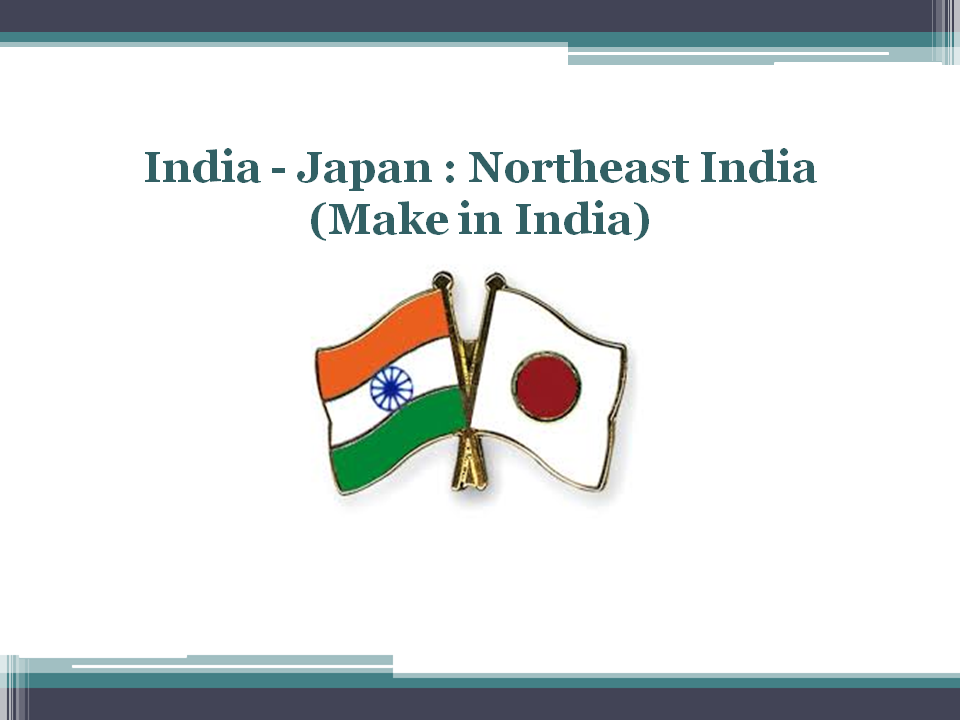 India and Japan have a history of close and friendly relations. People of both sides share deep linkages rooted in the thought process of Hinduism and Buddhism. The cultural exchanges between India and Japan have a long and glorious past. Both countries consider each other as a valuable partner in their journey to development and growth. Today, India and Japan relations, Strategic and Global Partnership are build on a growing convergence of economic and strategic issues.

India and Japan’s trade partnership is going great! Japanese companies are enthusiastically participating in the key initiatives of our current government like Make in India, Digital India and Smart Cities and more importantly for the development and growth of the North East States.

Our Northeast India is vibrant; Arunachal Pradesh, Assam, Manipur, Meghalaya, Mizoram, Nagaland, Tripura, and Sikkim are blessed with the rich cultural and natural resources. Prime Minister Mr. Narendra Modi used to refer Northeast region as “India’s Natural Economic Zone.” The North East India is one of the most strategically important parts of India too, therefore developing and transforming Northeast is one of the top priorities of our current government. Our government is working to improve the connectivity of these regions through road, rail, telecom, power, waterways and I-ways. Prime Minister Mr. Narendra Modi has defined Northeast India as the organic basket of India and as the gateway to South East Asia markets. In the development of NorthEast states, connectivity is crucial and it is good to see that Japanese companies are actively participating in the infrastructure development of Northeast India.

Japan is the first country which is allowed to invest in the infrastructure in North East India along with other strategically important parts of the country; this is a reflection of trust between our country’s leadership. There is a strong cultural connection between India and Japan and people of both sides have great respect for each other too. Let’s take a look at some interesting facts related to Indo-Japan partnership in Northeast India…

–Under Phase, I of the project, in which JICA and NHIDCL (National Highways and Infrastructure Development Corporation Ltd) are working together, the improvement of NH-54 and NH-51 in Mizoram and Meghalaya will be the focus.

–JICA also provided technical assistance during 2013-15 to study the development and management of land and water resources for sustainable agriculture in Mizoram.

–Japan is the only country whom India has actively invited to help in socio-economic development projects in Northeast India.

There is definitely no match for Japanese technology and expertise in high-speed railways, infrastructure, and manufacturing. Since Prime Minister Mr. Narendra Modi has come to power the trust between India and Japan has reached a new height, last year Japan has committed 25 billion USD investments in India. Japanese companies are eager to participate in Indian government programs and with each passing year, this trust is becoming stronger. Here I would like to quote the words of Prime Minister of Japan Mr. Shinzo Abe that “PM Narendra Modi’s economic policies are like Shinkansen – high speed, safe and reliable and carrying many people along, a strong India is good for Japan and a strong Japan is good for India,”.

India is going through a big transformation. Prime Minister Mr. Narendra Modi wants to make India a hub for manufacturing, cutting-edge research and innovation. In 2014 Japan has announced to invest $33.5 billion over the next five years through both private and public investment. To facilitate Japanese investment government has provided a dedicated structure called ‘Japan Plus’, this platform is facilitating the Japanese companies including SME/MSMEs to fast track their investment proposals in India.

India and Japan together are a winning combination. Both countries have got an action-oriented leadership. Japan’s active participation in Northeast states, Jharkhand and Andaman and Nicobar Islands, is a good sign! Railways, connectivity, infrastructure, and manufacturing are the key areas of Indo-Japan cooperation and now we are also shaping new partnership in space science, marine and earth since, textiles, sports, agriculture and postal banking.