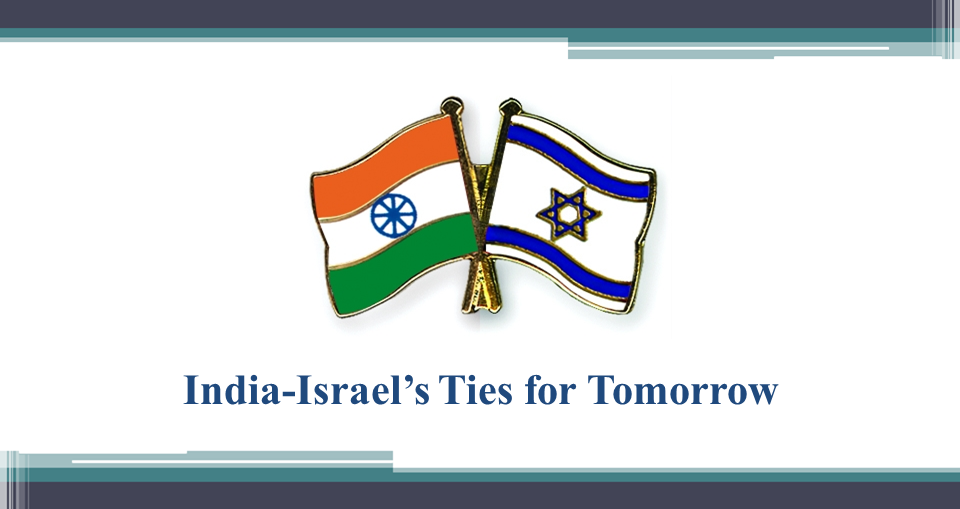 PM Modi’s Israel visit is an important milestone in the modern journey of India-Israel partnership. The Indian and Israeli capabilities have tremendous potential. The formula for the success of this partnership is given by Israeli Premier Benjamin Netanyahu as he said “it is I square T square that equals – Indian talent times Israeli technology. It equals Israel India’s ties for tomorrow.” Both countries have endorsed the vision to work cooperatively not only for their mutual benefits but for the good of the other parts of the world too; PM Netanyahu has said that “we are talking about also cooperation in the third countries by joining forces in various areas.”

The dimensions of India and Israel’s partnership are expanding, apart from Defense; both countries are also collaborating on agriculture, water management, urban management and space technology. India and Israel have raised their bilateral partnership to that of a strategic partnership level. The MoUs of worth over $4.3 billion were signed between Indian and Israeli companies in different sectors during the first meeting of India Israel CEO Forum which was organized on the third day of PM Modi’s Israel visit. There was a consensus that the trade volume between India and Israel has the potential to reach USD 20 billion in the next five years.

After the success of G2G and B2B cooperation, this is a right time to build “I (India) with I (Israel) and I for I” cooperation as PM Modi has rightly quoted. Both leaders have noted the importance of realizing the full potential of this partnership and they have asked their respective staff to bring the concrete plans to implement their vision for cooperation in different areas by the first week of January.

Key MoUs: Both sides have signed and exchanged seven MOUs on cooperation in the areas of innovation, technology, water, agriculture, and space science.

Both sides have reaffirmed the importance of bilateral defence cooperation and on the need to focus on the joint development of defence products, including the transfer of technology from Israel.

During PM Modi’s Israel visit, the first meeting of India – Israel CEO forum conducted and in the meeting 12 Strategic Business MoUs worth over US$ 4.3 billion were signed between Indian and Israeli Companies. The CEOs from both countries have discussed and identified sectors for mutual cooperation such as agriculture, irrigation, water treatment, urban infrastructure, transport, pharma, life- sciences, digital technologies, IT and ITes, start-ups and innovation and defence and homeland security. A dedicated web platform called ‘India-Israel Innovation Bridge’ was launched. This platform will promote and fast track the Israeli investment in India and will facilitate the Indian and Israeli companies in their partnership.

MoU between Wipro and Israel Aerospace Industries for manufacturing of Aerospace composite parts.

MoU between Cadila Healthcare and Phibro Israel to set up Poultry Vaccine project in India.

An MoU between Sun Group and Water-Gen for producing the safest clean drinking water from the air.

The Global Education and Leadership Foundation and Start-Up Nation Central and LEAD – Israel Youth Leadership Development have signed MoU to implement a phased approach towards the planning, implementation, and promotion of entrepreneurship and leadership development.

Agriculture Cooperation – Agriculture and Rural Development is one of the key focus areas of Indian union budget 2017-18. With 157.35 million hectares, India holds the second largest agricultural land in the world. In India, the agriculture sector is one the largest contributor to the GDP and Agricultural export constitutes 10 percent of the country’s exports.

After Defense, Agriculture is one of the key areas of India-Israel cooperation. Israeli Agro-technology companies and Indian Farmers make a combination that has the potential to transform Indian Agriculture sector into a brand.

During the 7th Vibrant Gujarat Summit India and Israel have signed a joint agreement for the third phase of the Indo-Israel Agricultural cooperation project. During the first and second phase of this project, 26 centers of excellence have been set up in different parts of India. In the third phase (2015-2018) both countries will further strengthen the bilateral agricultural development cooperation. Israel has opened center of excellences in different states of India mainly in Haryana, Punjab, Utter Pradesh, Gujarat, Maharashtra, Rajasthan, Bihar, Karnataka and Tamil Nadu and plans to expand further. Haryana is one of the most active states in Indo-Israel Cooperation project.

Israeli agricultural experts like Mr. Yoram Eisenstadt and Mr. Asher Eizenkot are actively working in India. Through regular workshops and guiding sessions, these experts are sharing their knowledge, technologies, and expertise in the field of agriculture and horticulture with our farmers and building a generation of trained and experts farmers in India.

The Indo-Israel Agriculture Project is the collaborative effort of the Israeli Embassy, Indian center and state government bodies, the Indian Agriculture Ministry’s Mission for Integrated Development of Horticulture and MASHAV (Israel’s Agency for International Development Cooperation in the Foreign Ministry). In the third phase, the Indo-Israel Agriculture Project will be aiming to open 10 more completely new Centers of Excellence in six more states. The new states to be involved in the expansion include Andhra Pradesh, Telangana, West Bengal, Madhya Pradesh, Goa, and Mizoram.

India – Israel agricultural cooperation is going in a right direction and the recent visit of PM Modi has given a right push to this cooperation.

Water Management Cooperation – Israel where 60% of the land is desert and the rest, is arid. Rainfall has fallen to half its 1948 average, amid the challenging situations Israel has given a model of water management, water desalination and water recycling to the world.

India and Israel have agreed to establish a Strategic Partnership in Water and Agriculture. This will focus on water conservation, wastewater treatment and its reuse for agriculture, desalination, water utility reforms, and the cleaning of the Ganges and other rivers using advanced water technologies.

During the historic visit, premiers of both countries have endorsed the water technologies of Israel and they have filled a new energy to this partnership. Israeli PM Netanyahu drove PM Modi on to the Olga beach in the Gal-Mobile vehicle. The Gal-Mobile is the product of G.A.L. Water Technologies Ltd., which provides Drinking Water from any source, anytime, anywhere. It is an integrated water desalination and purification mobile vehicle that can turn sea water into potable water. It can purify up to 20,000 liters of sea water a day. Gal-Mobile is very helpful to overcome water shortage during a natural disaster.

The Indian government is going to set desalination plants on a large scale. Some parts of our country are already using the Israeli desalination techniques. During PM’s visit, both countries have signed two key MoUs related to water cooperation.

Israel has got the world’s largest modern seawater desalination plant called ‘Sorek’, which provides around 20% of the potable water consumed by Israel. This plant produces clean water from the sea cheaply and at a scale never before achieved. From drip irrigation to water recycling, reclamation, wastewater reuse and desalination, Israel has become a leader in water technologies.

Drought is one of the biggest national crises that we face each year.  Many parts of the country face the acute water crisis, particularly between April and June. This year itself our government has declared eight states as drought affected. Israel’s water conservation methods can help us a lot. Israel’s Micro or drip irrigation methods are helping our farmers to grow quality crops with less water.

Earlier in the month of November 2016, India and Israel have signed the MoU for cooperation in the field of water resources management and development too. Israeli water companies like IDE Technologies and Mekorot the national water company of Israel, have built several desalination plants in India particularly in our South Indian states. Israel-based Tahal group has signed a USD 74 million agreement with Karnataka state. Tahal will design, construct and operate a water supply system in Karnataka that serves 131 villages in the state. Another Israeli company Water-Gen has inked an agreement with India’s second largest solar company to produce drinkable water for remote villages in the country. Water-Gen is the pioneer in air-to-water technology and a leader in water purification across the globe.

Smart City Collaboration – Israeli innovative solutions can play a crucial role in our smart city mission. A few months back Chief Minister of Maharashtra and Mayor of Tel Aviv have signed an agreement to collaborate on smart city projects, now Tel Aviv will share its smart city expertise with Maharashtra. The Tel Aviv is considered as the world’s smartest city, their knowledge and experience will help us a lot. India’s Smart City Mission offers great opportunities for cooperation in different fields for Israeli companies.

This visit has conveyed the much-needed message to the forces of radicalism, extremism, and terrorism! In a joint statement, Prime Minister Narendra Modi has said that “we have agreed to do much more together to protect our strategic interests and also cooperate to fight against growing radicalization and terrorism including in cyber-space.” There was a mutual acknowledgment of the fact that the fight against terrorism won’t work in silos!

Israel is a leader in hi-tech and cyber security technology. To deal with the challenges of cyberspace, Prime Minister of Israel has launched a project called National Cyber Defence Authority. The aim of this project is to provide a link between civilian and military authorities. This project will provide a cyber net to share secure information, to prevent attacks by an early warning and to provide a thorough guidance to participating entities so that they can better deal with the cyber attacks. In 2014, Prime Minister of Israel has invited India to collaborate on this project.

PM Modi’s visit has accelerated the enthusiasm on the both sides and its results will surprise the world!