Make in India, Make with India – A Snapshot 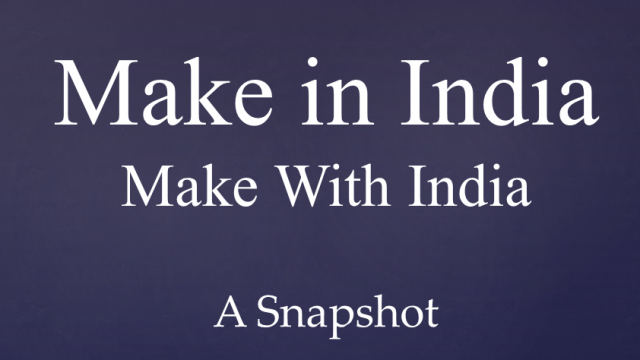 Corona crisis has affected the credibility of China and exposed an inherent insensitivity in its approach. There are news trends that due to the corona outbreak, several businesses are planning for leaving China and considering other attractive locations including India, as the next stop. But those who were keeping track of the changes in international trade, know well that the gradual shift in the global supply chain started much before Corona disruption and there are several factors behind that. From the last few years, almost all major investment agencies are highlighting India as the most favored destination for investment and growth in Asia. There is a wider recognition that India’s rise as a responsible leader and its foundational perspectives of mutual usefulness, and cooperation have the potential to shape the present uncertain environment of the region in a positive direction.

Even the professional critics of India’s growth trajectory cannot deny the fact that if Democracy, Demography, Demand, and Decisiveness have one shared address then it is India. India is perhaps one of those few countries in the world where the government and citizens both share a common sentiment for business and economic growth. Prime Minister Narendra Modi’s remarkable win in 2019 elections has demonstrated that the people of India stand strong with a government that takes bold and revolutionary steps to improve the development and business environment of the country.

Discussions around the ‘uncertain’ world were always there, from trade wars to fluctuating oil prices to unstable political environment to other unforeseen events, etc. and we should not undermine the fact that the immunity of the businesses is strong enough to fight any unexpected disruption. Almost all realistic assumptions are indicating that the recovery from the corona crisis is going to take the next three to four quarters, so this phase can be leveraged to explore the untapped potential that India’s giant leap in manufacturing and infrastructure offers. And a quick overview of recent developments can be a good starting point.

For manufacturing, a strong infrastructure base is crucial and India’s manufacturing and infrastructure push complement each other. India is going to spend about $1.3 trillion on modern infrastructure (from 2020-2025). With 5.5 million km of roads, India has the world’s 2nd largest road network and one of the largest rail networks of the world (spreading over 1, 23, 236 km). In the FY 2019-20, NHAI (National Highways Authority of India) has completed the construction of 3,979 km of national highways which is the highest ever highway construction achieved in a financial year.

Logistics costs have a crucial role in international trade. With Bharatmala (Road and Highways project) and Sagarmala (for Port/Maritime infrastructure) kind of grand vision in action, India is pushing hard to bring down its logistics costs to match with global average and achieving a gradual success in this too.

The approach of India’s infrastructure push can be best understood by the recent statements of Mr. Nitin Gadkari, Minister of Road Transport & Highways, Micro, Small & Medium Enterprises of India, on questions related to government’s plans for the development of infrastructure post-lockdown he said: “Earlier, I had kept a target of 30 km per day for the construction of highways and we have achieved it. Now I am thinking of taking it to 60 km per day. The speed of the development of road projects should be 2-3 times faster.”

With the three arrows of de-regulation, de-licensing, and de-bottlenecking, India is achieving new reform goals and its performance in global indexes is getting better with each passing year, it has made a remarkable jump in Ease of Doing Business ranking, from 142 in 2014 to 63 in 2019.

One of the recent EODB improvisations for strengthening ‘Make in India’ and ‘Make with India’ vision is taken up by the Central Board of Indirect Taxes and Customs (CBIC). To attract investment in the manufacturing sector and to encourage exports, in Oct 2019, India’s Central Board of Indirect Taxes and Customs has launched a bond scheme. Under this provision through a streamlined bonded manufacturing facility, all types of businesses can avail exemption on customs duty on imported items used in the production of finished goods to be exported. And for the case of domestic consumption, through this facility, the duty on imported inputs is deferred until the finished goods are cleared to the domestic market. According to Invest India, the official promoter of this scheme – Single point of approval, common application cum approval form for license and other permissions, the unlimited period of warehousing for capital and non-capital goods and easy compliance, etc. are some of the key features of this scheme.

Today, India is the world second largest mobile manufacturer, from just two mobile phone manufacturing units in 2014 to 268 units in 2019, this jump is highly significant. India is one of the largest consumer electronics markets in the Asia Pacific Region, which is anticipated to reach $ 400 billion by 2025. India’s growing economy, rising neo middle class, and aspirational young India offer immense opportunities for growth to electronics manufacturers.

Last month, to give a new push to electronics manufacturing and exports Indian government has approved a $6 billion roadmap, under which three schemes namely Production Linked Incentive Scheme (PLI), Scheme for Promotion of Manufacturing of Electronic Components and Semiconductors (SPECS) and Modified Electronics Manufacturing Clusters Scheme (EMC 2.0) have been notified. The PLI scheme is for encouraging large scale manufacturing of mobile phones under which incentives of approximately INR 40,951 crore will be awarded, the SPECS is for strengthening the domestic electronics supply chain and manufacturing ecosystem for electronic components and semiconductors while the EMC 2.0 scheme is for developing quality infrastructure as well as common amenities i.e. Common Facility Centers, Ready Built Factory, Sheds/Plug and Play facilities, etc. for electronics manufacturers.

After opening up private investment and liberalizing foreign direct investment (FDI) in defense production, the government is working to set up defense industrial corridors in the country. Two years back, in the Indian Union Budget 2018-19, the finance minister had announced the setting up of two defense industrial corridors in the country- one in southern state Tamil Nadu and the second in Northern state Uttar Pradesh.

Tamil Nadu is the eleventh-largest state in India by area. According to NITI Aayog’s India Innovation Index 2019, Tamil Nadu is also the second most innovative major state of India, next after to Karnataka. Tamil Nadu has a well-developed infrastructure with an excellent road and rail network. Tamil Nadu has four international airports and two domestic airports. The state also has the second-longest coastline in India with three major ports and 23 minor ports. Tamil Nadu is one of the highly industrialized states in India; the state has a network of about 113 industrial parks and has the highest number of operational SEZs (36) in India. A vibrant diversified industrial base, highly skilled manpower, advanced infrastructure, and flourishing manufacturing industry, are some of the key elements of the business environment of Tamil Nadu. The proposed Tamil Nadu defense corridor which is organized as a quadrilateral will extend from Chennai, Hosur, Coimbatore, Salem, and Tiruchirappalli. There are more than 120 aerospace components manufacturing companies and more than 700 suppliers are operating in the Tamil Nadu. Last year, the Tamil Nadu government released its new Defense and Aerospace Policy too.

Uttar Pradesh, the home to second defense industrial corridor, is the 4th largest State of India and it falls in the Golden Quadrilateral (the largest highway project in India and the fifth-longest in the world) connecting many of the major industrial, agricultural and cultural centers of India. Uttar Pradesh is also the third-largest producer of thermal power and the second-largest producer of hydel power in India. Availability of robust infrastructure, extensive road network and a large pool of talent are some of the factors which make Uttar Pradesh an attractive industrial destination. The state has major national and international airports connecting the rest of India, Middle East & Southeast Asian countries and has the largest railway network of the country too. On the occasion of the Uttar Pradesh Investors Summit 2018, PM Modi announced Uttar Pradesh Defense Industrial Corridor, which is expected to bring an investment of Rs 20,000 crore. There are nine Indian Ordnance factories, three Hindustan Aeronautics Limited (HAL) manufacturing units, and several Defense MSMEs that are active in the state. Nodes identified for UP Defence Industrial Corridor are Agra, Aligarh, Chitrakoot, Jhansi, Lucknow, and Kanpur. The UP Defence and Aerospace Manufacturing Policy 2018, aims to attract investment in Defence Park, Defence PSUs, Auto related components and Automobile manufacturing for military, Testing facilities, Police modernization, Forensics Centres, Drones Manufacturing and testing facilities, Aerospace Park, Aircraft/ Helicopter Manufacturing/ Assembling units, etc.

This is a very quick snapshot of the major manufacturing potential of India. There is a lot more to count on but in the end, it would be appropriate to say that if a long term vision is there and the ambitions to scale up are boundless, then there cannot be a better location than India.

Seeing opportunity in every crisis is the natural response of an entrepreneurial mindset and the time for leveraging that skill is here. The ‘Make in India’ and ‘Make with India’ journey has many success stories to recount but for those who still could not challenge their hesitations the present undesirable pause has a positive side; it gives an option to rethink dependence and offers enough bandwidth to explore the opportunities of supply chain diversification. For businesses across the world, which are aiming to scale up, this phase is an opportunity to become a partner in the next lion step of India.

One more thing about India is that its leadership believes in the mantra of ‘collective efforts’ and in every effort of the country, a unique partnership spirit between government and citizens is being reflected. Now in the post corona trust deficit world, when the governments and businesses across the world will struggle to regain the trust of the common people, India will certainly be in a position where the government, businesses, and common people will produce a new definition of Collaboration.

a2zstartup.com > Make In India > Make in India, Make with India – A Snapshot